ATLANTA — The great total solar eclipse of 2017 is now in the history books, but its effects will last a lifetime.

Channel 2 Action News had an exclusive partnership with the Tellus Science Museum in Cartersville and had reporters on the ground across Georgia and beyond as the eclipse made its way across the southeast.

IT'S TIME! The Total Solar Eclipse is moving across the country and we're ready! #EclipseLive 2wsb.tv/Eclipse2017

Charleston was the last stop for the eclipse along the path of totality.

Burns watched on with a large crowd of eclipse viewers at the College of Charleston as the sky became darker and darker, reaching totality shortly after 2:30 p.m. Monday.

"Everything is like it's 9 o'clock at night," Burns said.

The crowd of people started cheering as the eclipse reached its peak.

“That was insane. That was so cool. I’ve never seen anything like it in my life, clearly, but it was wow,” student Hannah Hartley told Burns.

“It was great. It was just something you don’t get to experience every day and it just happened in the middle of the day was amazing,” student Jonah Williams said.

“It is breathtaking," Burns said as the eclipse reached totality. “What an epic sight this is.”

"This is pretty cool. This is probably the coolest thing you can see on earth actually," Massimino told Burns.

Massimino knows a lot about eclipses.

He's seen one from space. 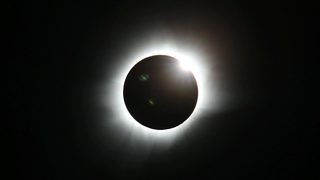 "A little bit different than what I've seen in space but I don't think any less cool than what it was in space," Massimino said.

The former Georgia Tech professor watched the moon cover the sun in totality at the College of Charleston Monday afternoon.

"It was very interesting to see the moon come and cover the sun, feel the temperature change and see it get dark and see the reaction of everyone getting so excited about it," Massimino told Burns.

Burns asked him how Monday's eclipse compares to the view from space.

"A little bit different. I was a little disappointed with the cloud coverage though. We didn't, I didn't get to see any stars. It didn't get as dark as I hoped here," Massimino said.

Burns asked Massimino what the astronauts on the International Space Station saw Monday.

In Rabun County, Channel 2’s Ross Cavitt was at the Dillard Hotel and Conference Center, where a large crowd gathered for the eclipse.

The hotel was in the path of totality as well.

Clouds rolled over the view of sun Monday afternoon as the eclipse was about to reach totality, but parted just in time for viewers to see the eclipse at its peak.

"It was really like divine intervention," Cavitt said. "I heard some prayers to the Lord, and it apparently worked."

He spoke to one 9-year-old girl who said watching the eclipse is something she’ll remember for a lifetime.

"It's really, really cool," she said.

At the University of Georgia,

to watch the rare event.

An estimated crowd of more than 20,000 people showed up at the stadium. There were so many people that school officials had to open up the south and west ends of the stadium.

“I didn’t think there would be this many people out here, but it’s like a really big event, so I guess it’s to be expected,” student Talliyah Draper told Channel 2's Richard Elliot.

Athens was not in the zone of totality, but the eclipse got to more than 99 percent.

Despite not reaching 100 percent totality, everyone was still amazed.

We were at 99% in Athens but it still got real dark at Sanford Stadium. #EclipseOn2 pic.twitter.com/gq1ed2RcK5

ECLIPSE USED AS A TEACHABLE MOMENT

Students who spent the first weeks of school learning about the eclipse finally got their chance to watch it unfold Monday.

The loading dock area at M. Agnes Jones Elementary School in southwest Atlanta became a classroom where hundreds of students got to experience the historic solar eclipse.

“This is like our biggest dream -- real-life experiences right here in our own backyard,” teacher Mrs. Zimmerman told Wilson.

Some classes made predictions about what would happen to the school's hens, Cocoa Puff and Valentine.

Students filed out of the building and sat in rows to watch the eclipse.

“They’ve seen models, they’ve seen streamed on the internet, but this is real and happening right now so they are so excited,” Zimmerman said.

The students all got MoonPies for dessert after the eclipse.

Solar eclipse glasses, music, refreshments and drinks. That’s how people who work in the Colony Square building in midtown took part in history on Monday.

“I don’t know if the quality is any better up here, but it’s a nice party,” rooftop spectator Kip Dunlap told Channel 2’s Tyisha Fernandes. “It’s once in a lifetime.”

The group of eclipse watchers was some 300 feet in the air, watching the solar eclipse from the rooftop.

We were thrilled to welcome @wsbtv and @cbs46 to watch #eclipse2017 on our @ColonySquareATL rooftop over @MidtownATL! #reimagineCS pic.twitter.com/tj5wVeI1lZ

On the ground, at Woodruff Park on Peachtree Street downtown, about 300 people stood in line to get their glasses.

Antoinette Johnson got in line at 9 a.m. to make sure she didn’t miss out. She was looking forward to having a great story to tell.

“I want to tell my grandchildren about it and I want to be a witness so I can say, 'You know, your grandmama was there,'” Johnson told Fernandes.

Some Georgia State University students skipped class to get a glimpse.

“The sun actually appears red. It doesn’t appear as the bright white color it is in the sky,” GSU student Tariq Islam told Fernandes.

As everyone waited for the big moment at 2:36 p.m., they felt the atmosphere changing.

"It's cooler than it should be at this time of day and it’s darker. The light is eerie,” Islam said. “There’s almost no one on the roads right now. Peachtree Street looks like it does on a weekend, on a Sunday.”

9 metro Atlanta locations named on list of the nation’s worst interchanges, including 2 in top 10